In his latest Journal entry, Christopher Archambault, Head of Food, writes about the quintessential British berry, the strawberry and provides the perfect summer recipe.

The ultimate British band waxing lyrical about the quintessential British berry. Hard to imagine what the lads were on about, but how could they go wrong with Fragaria; the strawberry, the very symbol of summer itself. This Latin name Fraga refers to the fruit’s fragrance. The English word ‘strawberry’ is due to the ‘straying’ erratic habit of the plant, much like many of its rose and blackberry cousins.

The cultivated berry with which we are so familiar is borne of British innovation through pioneering large scale breeding; producing two famous varieties, the Elton and the Downton. The very names conjure up some past-it pop star strolling the regal corridors of his empty abbey. Yet it was market gardener Michael Keens that produced the ‘Keens’ Seedling’, blowing all others out of the race with sensational size and flavour.

So what makes the strawberry so special, so perfect in every way? Well, the timing couldn’t be better. A long, often droll and damp winter usually gives way to a wet spring, and then strawberries hit late spring/early summer, hearkening the end of the ‘hungry gap’. It is one of the first sure signs of good times ahead, a bright red siren of juicy goodness, beckoning in the promise of July and August heat. Best to be savoured as nature intended, during the summer months. There really is no point in being plied with foreign fluff in January...they may look like strawberries, but they don’t taste like much, and it just isn’t cricket. There is a very particular bon-bon burst that occurs with a well sun-ripened specimen, just the right amount of acidity with that unmistakable flavour. If you’re fortunate enough to have sampled any wild varieties…the exuberance packed into those little wonders would have Willy Wonka himself scratching his head in wonder.

Timing, taste…what about the fact that they are wholly unique in the entire fruit world? Here comes the science. Technically they are known as an ‘accessory fruit’. The seeds which, unlike those of any other, are on the outside and are the true fruits of the plant. The fleshy ‘berry’ to which they are attached is an enlarged, softened receptacle, corresponding to the small, white cone connected to the stem. This cluster of dry fruit seeds is described in Radio 4 circles as an ‘etaerio of achenes’ as opposed to the raspberry’s ‘etaerio of druplets’. Of course. Thank-you Alan Davidson.

So, how to eat them. Straight up with a little caster sugar stirs my boyhood memories. The sugar acts as a textured seasoning, bringing out the strawberry-ness even more. The Wimbledon way, with cream, one can never go wrong. The North American strawberry shortcake is a winner, or a touch of sophistication from the continent, macerated in red wine. Preserves, The Cornish Cream Tea, the list is fairly exhaustive.

However you indulge, just make sure they are served at room temperature, like a good tomato; fridge cold is disappointing and painful on the teeth. Also, dipping in chocolate is a no-no. Whilst often prepared, really doesn’t work. There is an odd chemical reaction that occurs between strawberries and chocolate that renders them both inedible when paired. White ‘chocolate’ yes, dark or milk, no. Personally, I don’t think they can be beaten when joined with a just-whipped Chantilly or classic panna cotta. Fragaria lend themselves so very well to the richness of dairy.

3 Leaves Gelatine, soaked in cold water (Or 6g agar- whisked in whilst heating the cream mix) 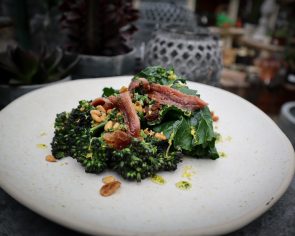 This month, Christopher Archambault writes about 'The Hungry Gap' and one vegetable - purple sprouting broccoli that challenges this seasonal dilemma.

Lunch menu served from 12 noon every day, no need to book.