The wonder of rhubarb

In his latest journal article, Christopher Archambault explores the beauty of this extraordinary edible.

Rhubarb. Even the name sounds beguiling. Interestingly, it’s a vegetable. But we’ve been subjected to a US customs court ruling from 1947 stating its fruit status. Go figure.

My grandmother used to give us little bowls of chopped rhubarb and watercress, with saucers of caster sugar for dipping. The original sherbet dip!

Forced rhubarb is a guilt-free human intervention that pays dividends. ‘Forcing’ kickstarts and speeds up the natural season, whilst concentrating its iridescent hue and sweetness. Natural rhubarb will come good starting from April, and we’ve several fantastic varieties here at The Nursery.

I’m a big fan of the ‘agro-dolce’ flavours of Sicily, and here we give our rhubarb a good sour/sweet pickling to cut into the earthy flavours of charred Cornish mackerel. A few choice and well-weathered chard leaves from the garden; and you’ve a very simple, visually enticing, and tasty light lunch. I’ve also added a few beetroot disks…the two-tone purp-ly goes well with the incandescent pink.

Points to consider- As the season goes on, rhubarb tarts up ever more…you’ll have to adjust the sugar in your recipes. Also, if you find your rhubarb a bit lacking in colour, a few drops of Grenadine in the mix won’t go amiss. 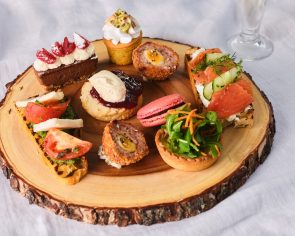 A luxurious special treat, perfect for celebrations and special occasions 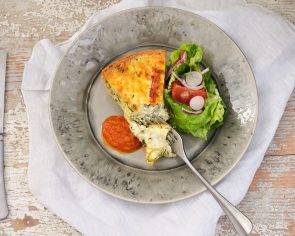 Lunch menu served from 12 noon every day, no need to book.