This is the time of year when gardeners stand and stare forlornly at bare patches of earth looking for signs of life. The combination of weeks of rain interspersed with hard frost is difficult for plants, especially where drainage is less than perfect, and there will certainly be casualties.

Looking back at the original planting lists for the bumblebee garden it is clear there have been losses since the planting in 2018 and 2019. Some plants have disappeared without a trace and not been missed. Others have declined slowly and been removed; a plant in its death throes is never attractive. Surprisingly the two blackberry cultivars have all but died, which is odd as brambles are survivors. We have also lost most of the soft fruit bushes, one blackcurrant and one redcurrant remain. All the gooseberries have gone. There may be a problem with the soil, or whatever, beneath the top layer. There is more detail about this in the recent article about the kitchen garden.

In the shrub and shade area of the garden, the Arbutus unedo, Cotoneaster Cornubia, myrtles, bay and the two trees are all thriving, but the rhododendrons and skimmia are less happy. The mini-hedge of rosemary either side of the wooden seat died, bush by bush. The privet hedge along the lower boundary is flourishing. The losses seem to be specific to plants and not to a particular area of the garden. Gardening is never straightforward, there are always mysteries, but every plant that expires is an opportunity to plant something new.

Before this becomes too gloomy, there have been triumphs. Lupins have all but taken over one corner of the garden, being in bloom continuously for months (with regular deadheading). The Nepeta Six Hills Giant has flowered spectacularly twice each summer, and Lavender Grosso has impressed all who see it. Verbena Bampton with its aubergine coloured foliage has created interest too. We grow sweet peas every year, and have found Gwendoline is a star performer with fragrant and vigorous pale pink flowers on long stems for cutting. Matucana has smaller bi-coloured flowers with an intense fragrance, and a longer season than any other variety we grew. Of the other annuals we grow, Echium vulgare Blue Bedder, Cerinthe major purpurascens attract attention with their vivid blue flowers. Malope Vulcan and Lavatera trimestris New Dwarf Pink Blush have wowed in the pink shades. All these annuals are easy to grow and highly recommended.

On a completely different tack, some of the bumblebees we have seen in the garden are infested with mites. They look like tiny brown seeds nestled between the bumblebee’s head and thorax. These mites are detritivores which live in the nest devouring old wax and rubbish and keeping the nest clean. They are generally harmless and do not damage or parasitise the bee, or spread disease. In extreme cases, where there are a great many mites, their weight may make it difficult for the bee to take off and fly. If you happen to have a small paintbrush in your pocket, you could gently brush off some of the mites and lighten the load. 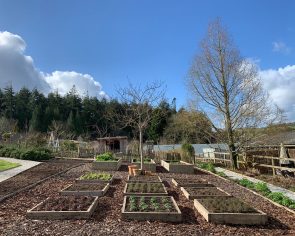