A seasonal Journal entry at this festive time, Becky our Nursery gardener has put some thought to the history of Mistletoe.

Mistletoe is an odd plant. It is forgotten for most of the year, but when it appears we think of Christmas and kisses. The mistletoe we are familiar with is the European mistletoe, Viscum album, which is the only species native to the United Kingdom. However, there are approximately 1500 species of mistletoe worldwide, mostly in tropical areas. There are 85 species in Australia alone. It is the state flower of Oklahoma, and the county flower of Herefordshire. There has been an annual auction of mistletoe at Tenbury Wells for over 160 years, until Covid cancelled it in 2020.

Mistletoe is a hemi-parasitic plant: it extracts water and nutrients directly from the circulation of the host tree, but because it also contains chlorophyll and photosynthesises it is not entirely parasitic. We are accustomed to seeing mosses and ferns growing on trees in Cornwall. In this case the plant is using the tree merely as a place to grow, extracting sustenance from water and debris accumulating on the bark but not from within the tree. These are epiphytic plants, our temperate equivalents of the orchids and bromeliads seen in the tropics. Mistletoe seeds are enclosed within white berries, which are very sticky. Most seeds are spread by birds, either in their droppings, by regurgitation, or by being wiped from a bird’s beak. Their favourite host trees include poplar, lime, hawthorn and apple (the orchards of Hereford are renowned for their mistletoe). Once a seed germinates on the bark of a tree, it puts out a little root which may take up to a year to penetrate the bark. At this stage the plant is not parasitic and depends entirely on photosynthesis to survive. In time a structure called a haustorium develops, invading the tissues which transport water and nutrients around the tree, and diverting some into the growing mistletoe plant.

Mistletoe has significance in many ancient cultures. The ancient Greeks and Celts associated it with male fertility. The Romans associated it with peace, love and understanding, and hung it in doorways to protect a household. In Norse mythology, it became a symbol of peace and friendship as an act of reconciliation after one god murdered his brother using an arrow made of mistletoe. In the first century AD Pliny described a druid ritual in which “they prepare a ritual sacrifice and banquet beneath a tree and bring up two white bulls, whose horns are bound for the first time on this occasion. A priest arrayed in white vestments climbs the tree and, with a golden sickle, cuts down the mistletoe, which is caught in a white cloak. Then finally they kill the victims …. They believe that mistletoe given in drink will impart fertility to any animal that is barren and that it is an antidote to all poisons.” That was all a very long time ago. The association of mistletoe with love and fertility persisted, and by the 18th century it was incorporated into Christmas celebrations in many nations. The ancient, ritual significance has now become remote and kissing under the mistletoe is little more than a part of general Christmas jollity. There are various versions of the rules around kissing under the mistletoe. Some say bad luck will follow any woman who refuses a kiss under the mistletoe. Others say a berry must be plucked for every kiss, and when there are no berries left – no more kisses.

You can try and grow your own mistletoe but it is a slow process. Seeds from Christmas mistletoe are not suitable as they are immature at the time of picking. If you can, collect seeds from a living plant in March or April. Squish the seed out of the berry and press it into a crack in the bark of your host tree, or make a slit with a knife and poke the seed in. The tree should be at least 15 years old, and the chosen branch quite high up so the developing mistletoe will get good light. It may be 5 years before it bears berries, but unfortunately your plant may never bear berries at all. Mistletoe is dioecious, which means there are separate male and female plants, and only the females will form berries. It would be best therefore to sow a handful of seeds and settle in for a long wait. 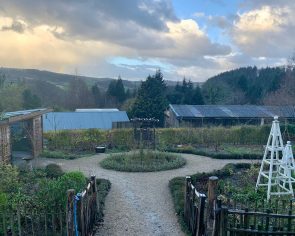 Becky Martin writes about the Bumblebee Garden this December. 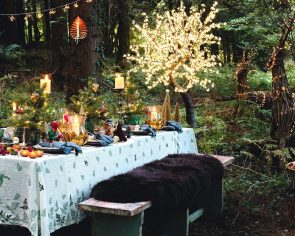 Join us this year for a whole host of festive fun, food and inspirational seasonal shopping

From Christmas lunches and suppers, late-night shopping, living gifts and a reindeer trail, we'll look after you.